Colbert Kid Questions: How To Submit A Question To The Late Show With Stephen Colbert

​It's as easy as using the hashtag #ColbertKidQuestions! Check out all the details, including important terms of submission.
Parents, this is such a challenging time, what with schools closed and your boss expecting you to work long days from home. Why not let Stephen Colbert take the kids off your hands for a while? Even better, why not let Stephen answer all the questions you're sick of fielding yourself, like, "How do socks work?" and, "Why are there worms?" 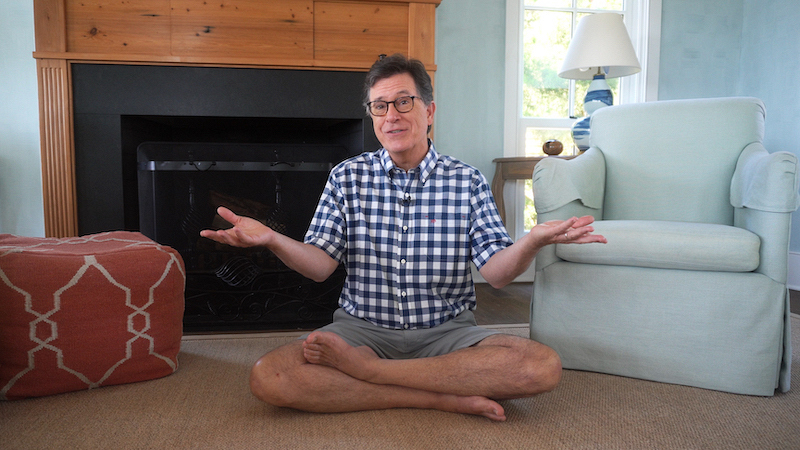 WATCH: Clips And Full Episodes Of The Late Show On CBS All Access

If your kids have questions that need answering, post them to social media using the hashtag #ColbertKidQuestions, PLEASE INCLUDE THE CHILD'S NAME AND AGE, and Stephen might answer them on the next edition of "Colbert Kid Questions" on The Late Show.

By submitting an original video of your child asking Stephen Colbert a question(the “Video”) to The Late Show with Stephen Colbert (the “Show”), you represent and warrant that:

- The Video is original, you are the sole owner of the Video and you have the sole and exclusive right to grant all rights in the Video and no further consents are required from any other party for the Show to exercise the rights granted herein;

- You are at least eighteen (18) years old and the legal age of majority in your state of residence;

- All individuals appearing in the Video are aware of the Submission and have given you permission to submit the Video;

- Except for the license granted to the Show in these Terms of Submission, you have not granted, and will not grant, any rights whatsoever in the Video to any other person or entity;

- The Show’s reproduction, publishing, displaying and/or other use of the Video will not infringe any third party's rights, including, without limitation, copyright, trademark, right of publicity, right of privacy or trade secret and will not in any way violate any applicable laws, regulations or network standards;

- You are the parent or legal guardian of any minor appears in the Video;

- You agree that the Show may reproduce and broadcast your Video, on-air, and on any CBS website, including www.cbs.com (the “Website”), and in advertising and promotion for the Show on-air and off-air and on the Website. The Show may exploit the Video as it sees fit for any purpose whatsoever, in any and all media now known or hereafter developed, worldwide in perpetuity, without additional approval, permission, notification or compensation;

- By submitting the Video you grant the Show, its licensees, affiliates, subsidiaries, successors and assigns an exclusive, worldwide, royalty free, perpetual, irrevocable, fully sublicensable right to use, reproduce, archive, edit, adapt, copy, publish, display, distribute, perform, translate, modify and in any other way exploit the Video and all elements contained therein, and to incorporate the Video into other works in any and all media, now known or hereafter developed, without additional approval, permission, notification or compensation;

- You consent to the use or reuse (without limitation as to when or to the number of times used) by the Show, licensees, affiliates, subsidiaries, successors and assigns of your and/or your child’s name, image voice, likeness, statements, biographical information and other identifying information, including, without limitation, any such information included in the Video as used, edited or modified by the Show, in any and all media, now known or hereafter developed, worldwide in perpetuity, in and in connection with the Show, the Website, any related television programs or productions and in and in connection with any advertising, promotion or publicity;

- The Video is suitable for display and publication on national television and does not contain any nudity or content or performance that is sexually explicit, sexually suggestive, offensive, illegal, pornographic, indecent or obscene or that is in bad taste or is otherwise objectionable to the Show, in its sole discretion;

- The Video does not contain libelous , threatening, sexist, homophobic or otherwise defamatory and/or offensive statements (including but not limited to words or symbols that are widely considered offensive to individuals of a certain race, ethnicity, religion, sexual orientation or socioeconomic group);

- The video does not contain any music;

- You forever waive any rights of publicity, privacy, intellectual property rights, claims of defamation and any other legal or moral rights that may preclude the Show’s use of the Video, and release the Show and its licensees, affiliates, subsidiaries, successors and assigns from any and all claims, damages, liabilities, costs and expenses arising out of, or resulting from, or in connection with the Video.

Watch all-new episodes of The Late Show with Stephen Colbert weeknights at 11:35/10:35c on CBS and CBS All Access.