Inside The Dome—Q&A With Supervising Sound Editor Walt Newman

A sound is worth a thousand words
While watching Under The Dome, you might not see Walt Newman, but you can feel his work through every moment of the show. As Supervising Sound Editor, he creates the environment and sets the tone, so to speak, for each episode. A local product of Hollywood High and Cal State Northridge, he's risen to the top of his industry with five Emmy Awards. He took a moment to share some insights about how he brings the Dome's world to life. 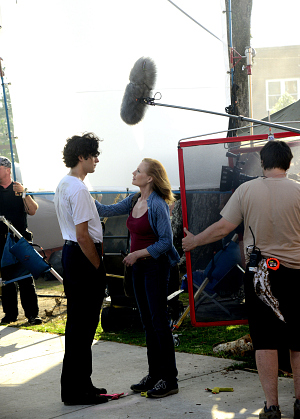 If the audience closes their eyes while watching UTD, what do you want them to take away from what they're hearing?
I hope the sound job sounds like a movie to them. I hope the sound helps to tell and enhance the story. As an example, when the Dome crashes down in the the very first episode, we tried to make it surprising and terrifying at the same time. We needed a sound—or a combination of many sounds—to make them feel like they were trapped. Inside, the Dome needs to have a feeling of isolation: no traffic, no birds, the only life is that of the people inside. In other episodes, when the Dome gets angry, it needs to become scarier as it's closing in on us. Every show has its own life in the sound world. Neal Baer loves big sound and gives us the freedom to experiment with all the sounds that make up the Dome, inside and out. Under The Dome does not lack in opportunity to make it an interesting sound job!

In a show like UTD, does the audio get edited to match the visuals, or do the visuals get edited to match the audio?
With all TV shows and movies, sound and music are edited to the picture—unless it's animation. Every sound from air, birds, gun shots, cars, skids, you name it is cut to picture out of a library of millions of sounds. All the dialogue is recut and cleaned up. Every footstep is added to everyone in the film. Everything has to be cut to fit in terms of length, sync, and the type of sound it is. A VW sounds different than a Ferrari. A crow sounds different than an eagle, etc. Also, within that sound we may have a choice of 500 different crows to choose from.

What's the one thing you always notice about music/sound in TV shows that you didn't before you started in this career?
I probably didn't notice much before this career. If you're watching a good movie you usually just go along for the ride and enjoy it. The music is the music, the sound you figure was just there. The last thing you'd care about is what went into it. Of course, now that I'm jaded, if I think the sound or music doesn't fit, it ruins the entire movie for me. Most sound jobs today are pretty sophisticated, so fortunately that doesn't happen much, but occasionally.