What's so special about a bungalow? Learn all about Strange Angel's pre-war California abode—and the design within.
For those of you who've streamed the CBS All Access historical drama Strange Angel, which takes place in 1930s-era Pasadena, California, you might've noticed the cute Craftsman homes populating the neighborhood where rocket engineer Jack Parsons (Jack Reynor), his wife Susan (Bella Heathcote), and their mysterious neighbor Ernest (Rupert Friend) live. 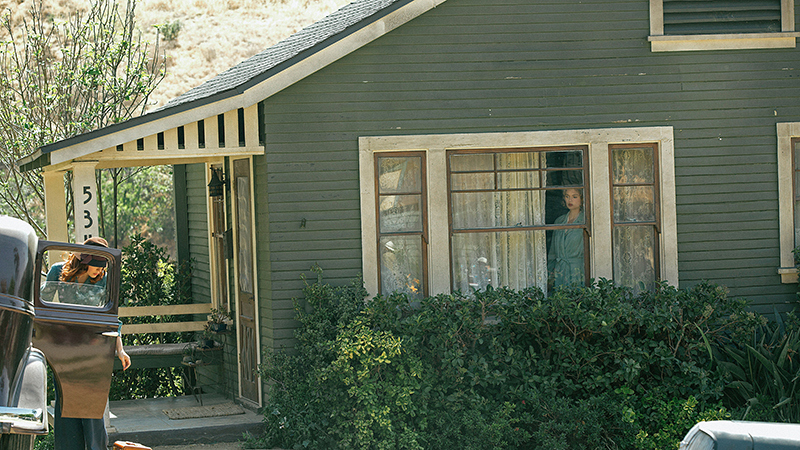 Typically described as a one-story home boasting a large porch, the Craftsmans were known for being smaller structures you could build quickly and affordably. And, much like the Parsons, they have a special relationship to Pasadena and California.

So, who created the California Craftsman? Well, we primarily have Pasadena-based architectural firm Greene and Greene to thank.

While the Greene brothers were especially well-known for building ambitious American Craftsman landmarks like the Gamble House and the Robert R. Blacker House, both of which were one-time residences that now serve as two of the area's grandest homes, the Craftsman layout could be utilized for families of all incomes.

(Fun fact: The Gamble House was used as Doc Brown's family home in Back To The Future!)


"We know that Sears and other manufacturers were mass-producing these kit-homes that could be ordered from a catalog and shipped off to any part of the world," says Strange Angel Production Designer Warren Alan Young. "Pasadena was full of these catalog homes. Some of them were custom-built, but it was a typical home for a wide range of income. You had the working-class families who lived in some, and then you had middle-class families that lived in a larger, maybe two-story Craftsman bungalow. The two that we use for Jack and for Ernest were most likely built for working-class people."

Want to know a little more about the Craftsman home?

We spoke to a crew of experts on the subject, including Modernica co-founder Frank Novak (who, fun fact, also rents furniture to the Strange Angel set!), Apartment Therapy Design Editor Bridget Mallon, Tastemade Head of Home and Design Amanda Dameron, and more to get some background into the architecture and design of the California bungalow.

The Arts & Crafts Movement And The Craftsman Home
With a focus on simplicity, the original Arts & Crafts movement actually started in Great Britain as an anti-industrial movement in the decorative and fine arts. Its peak era was between 1880 and 1920.

Meanwhile, bungalows in particular first popped up in India, and were eventually co-opted by British Imperialists in the 19th century.

Then, taking inspiration from that time, as well as the philosophy of English textile designer William Morris, who stressed structural minimalism and the use of natural materials, American brothers Charles Sumner and Henry Mather Greene of the aforementioned Greene & Greene architectural firm began building "Ultimate Craftsman" homes around California in the early 1900s.

"California was unique in that it offered a landscape that was suited to address all of these principals," says Amanda Dameron, the Head of Home and Design for food-and-travel site Tastemade. "The Greenes were acutely aware of their opportunity to represent California in this regard. Their homes utilized 'clinker bricks'—over-fired and irregularly shaped bricks that are usually avoided in conventional structures."

WATCH: Expand Your Mind With An Eye-Opening Lesson On The 1930s Occult

Stressing the push toward all-things natural, Young also points out that there was a lot of forestation going on at that time in Pasadena, which means people were using a large range of rough materials to build homes and furniture.

"Lots of oak trees were around, so homes were built with the oak, and then the furniture that was designed for the home was also built from the oak," expands Young. "There was a range of colors, particularly for Craftsman homes, that really connected to the earth."

Frank Novak, co-founder of modern-furniture company Modernica, tells us more about the Craftsman's back-to-nature movement: "If the [1930s] Art Deco era was about the future and everything was streamlined, [the Arts & Craftsman movement] was reacting against all of the modern industrialization, which was kind of a shock to the world.

"Pasadena back then—before the Pasadena freeway, which was built, I think in the mid-'30s—Pasadena was almost like a vacation destination," Novak continues. "The same way Venice, California was. I think [the Craftsman] really thrives in Southern California because it’s an indoor-outdoor environment. There was no air conditioning back then... Just the way that ugly McMansions are the style now, bungalows were the style then. I’m sure it was more economical coming from the Victorian era." 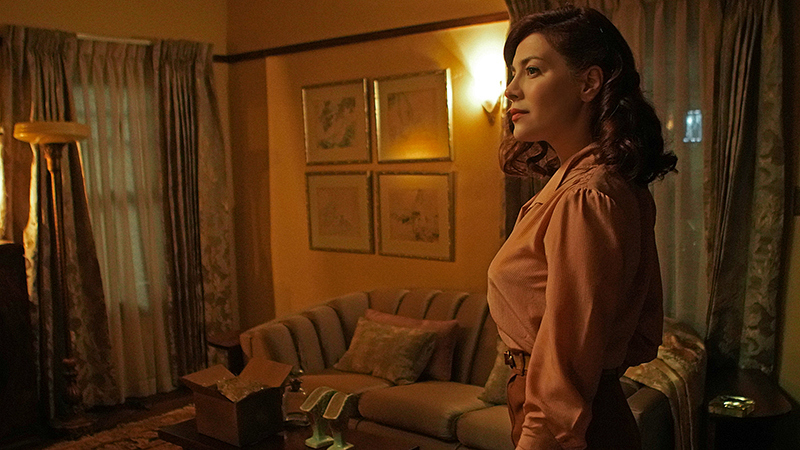 What A Typical Craftsman Looks Like Inside
According to Apartment Therapy Design Editor Bridget Mallon, most Craftsman homes were primarily built with function in mind. Think built-in breakfast nooks and cabinets.

"The architects and craftsmen were intent on making their hard work visible inside the homes, so gorgeous exposed woodwork and eye-catching fireplaces were common features," she says.

Understanding The Parsons' Pasadena Craftsman In Strange Angel
First, it's important to understand that, for a lower-income family like the Parsons, "interior design" would be seen as more of a pursuit of the wealthy. Which is to say, Jack and Susan probably were more concerned with keeping up with their mortgage than decorating their home.

But, if you had money, then it was a different story.

"The 1930s were all about opulence, luxury, lustrous furniture and textiles, sumptuous and exotic materials," says Dameron. "After and during the war, these materials were nearly impossible to come by, save for the fantastically wealthy." 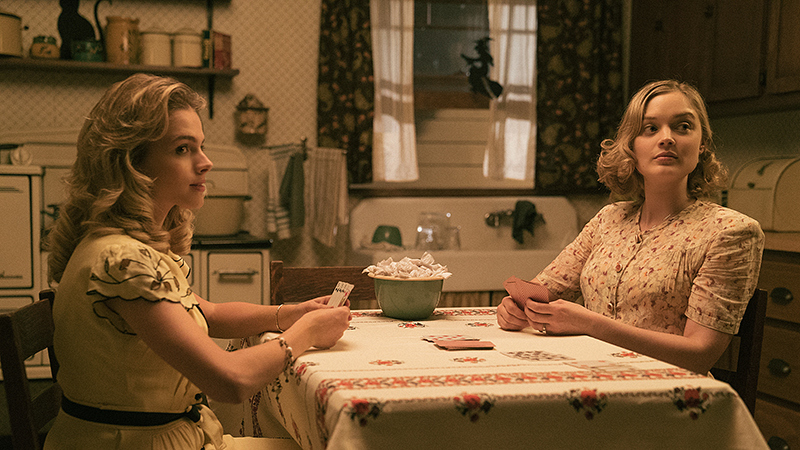 Young, meanwhile, offers a glimpse into how the Parsons decorated their Craftsman on Strange Angel, noting that most of the furniture they own is probably secondhand.

"There's some furniture in the home that Jack's mom, who was wealthy at one point, may have handed off to them, and then Susan's family probably offered them some other things," he says. "Secondhand acquisition of furnishings was pretty prevalent, particularly after the Great Depression. You weren't going out to spend a lot of money on even dishes and things like that."

Ultimately, according to Dameron, the focus for a family like the Parsons would be less about decorating their home and more about creating a cozy space for entertaining with their limited means.

"Making do and doing one's part was prized above the pursuit of a gloriously furnished home," she says. "After the war, during the mid-century years, we saw a return to joy and optimism, as expressed in furniture, art, architecture, graphic design, and more."

The State Of Bungalows Today
Nowadays, bungalows can still be found all over Los Angeles—and much of California itself.

(Though, as Curbed LA has pointed out, L.A.'s bungalow courts—an economically minded cluster of bungalows—are increasingly endangered due to rising property values.)

That means you'll have to have a little more cash than the Parsons did to purchase a bungalow these days.

According to American Bungalow magazine, rising house prices nationwide through the late 1990s and early 2000s, as well as the central and convenient location of many bungalow-heavy urban neighborhoods, have fueled demand for these houses. In fact, some three-bedroom bungalows in San Diego can sell for $650,000 to $700,000, or more.

Renting may be the more affordable option, at least in the short-term. The site RentCafe.com cites the average rental for a one-bedroom bungalow in Pasadena's Bungalow Heaven neighborhood is around $2,000 per month.

Cost aside, one thing's for sure: Bungalows remain an enormously popular housing choice in California, decades after they were first built.

To see more of the Parsons' Craftsman home, stream all-new episodes of Strange Angel on Thursdays, exclusively on CBS All Access.