This Star Trek: Discovery actor is quite a character.
There's no question that many Star Trek actors go on to become iconic in their roles. But character actor Doug Jones, who plays Saru on Star Trek: Discovery, is inarguably already a seminal presence—if not an immediately recognizable one.

What does that mean?

Well, for starters, Doug has more than 150 credits to his name in TV, commercials, film, voice work, and more. He's perhaps best known, though, for not being seen. The majority of Doug's roles have featured him in all manner of masks and makeup, which, over about 30 years, has earned him a reputation as Hollywood's go-to creature actor.

And, in addition to portraying First Officer Saru, he's gained acclaim for this portrayal of a mysterious merman (for lack of a better word) in Guillermo del Toro's The Shape of Water.

Read on to learn more about the man behind the mask: the one and only Doug Jones. 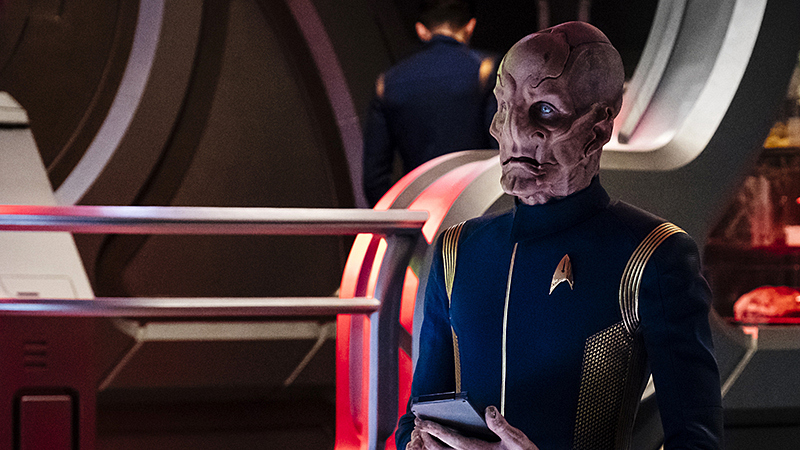 He's trained in mime and contortion.
When Doug was studying at Ball State University in Indiana, he was recruited him for his college's mime company, Mime Over Matter. He was also acted as Ball State's school mascot: Charlie Cardinal.


He originally wanted to star in sitcoms.
When Doug was a kid, he grew up inspired by comedies like CBS classics like I Love Lucy and The Carol Burnett Show.

He has a great working relationship with director Guillermo del Toro.
Doug has appeared in a number of films directed by Guillermo, including Mimic, Pan's Labrynith, both Hellboy films, Crimson Peak, and, most recently, the Golden Globe-nominated The Shape of Water.


He's appeared in more than 100 commercials.
Perhaps the most famous one was his turn as the "Mac Tonight" McDonald's moon in the '80s.

He's shown up in plenty of music videos, too.
Doug has popped up in all sorts of music videos, such as: Madonna's "Bedtime Story," The Red Hot Chili Peppers' "Soul to Squeeze" clip, and Marilyn Manson's "I Don't Like Drugs (But The Drugs Like Me)" video.

He cuts his own hair.
According to his official biography, Doug is also known to give haircuts to cast and crew while on location.

READ: Why Saru Is The First Officer We Never Knew We Needed

He loves to sing!
Not only does Doug have, according to his official biography, a "very versatile baritone voice," he's also an active member of his church choir. Lovely!

He’s been with his wife, Laurie, for more than 30 years.
They met at Ball State University, Doug's alma matter.