The Emmy®-winning composer discusses crafting the iconic music for the CBS All Access original series.

By now, Star Trek: Discovery fans are well-acquainted with the show's excellent main title theme and score by Emmy®-winning composer Jeff Russo. Drawing on iconic sounds from the franchise while also boldly going where no Trek music has gone before, the new soundtrack has definitely made a huge impact on the series thus far.

Last year, we had the opportunity to speak with Russo at the Eastwood Scoring Stage at Warner Bros., where he was recording the show's main theme. During the interview, we discussed how he approached the score, his influences, the musicality of Star Trek, and more... 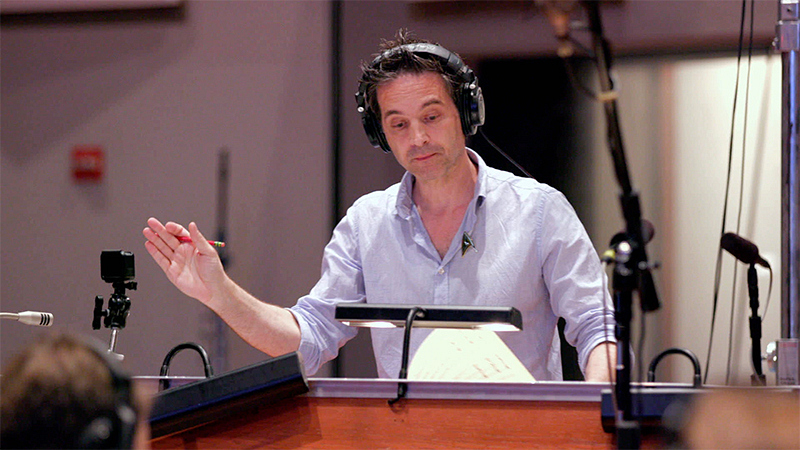 Can you start by telling us how you got involved in Star Trek?

Jeff Russo: I became a huge fan of the Star Trek thing with The Next Generation, which started when I was graduating high school. Once I got into that, then I went back and got to know the original series and just became a really big fan of that whole world that was created.

For this incarnation, it was just one of those things that was a happy accident, I think. I'd been working on some various shows, and I met one of the producers on the show who happens to be a parent of a friend of my daughter's. We were just talking, and she happened to comment on something I was working on at the time, a show called The Night Of, which was on HBO. I had no idea what she even did, and I asked, "What do you do?" And she said, "Oh, I'm a producer." I said, "Oh, what are you working on?" She said, "Star Trek." And I was like, "Wow! That's fantastic." She said, "Would that be something of interest to you?" And I was like, "You're kidding, right?" And she said, "Well, you should come in; we should talk! That would be really great. You know, we're big fans of your work." And I was like, "Well, I'm a huge Star Trek fan."

So, we started having conversations about it... At some point, somebody was like, "Yeah, we'll get that guy to write the music," and there I was writing the music for it.

How do you approach a huge franchise like this? It already has so many iconic themes. Where do you start?

Russo: Well, no pressure. [Laughs.] You know, I kind of have to look at it like everything I've worked on. I have to look at it from the narrative and the characters. I will of course pay homage to the musical predecessors, and I think the sound and the tone of what the previous composers have brought to the franchise is meaningful. But I approach things from a very narrative perspective, and I approach things from a very character-based perspective. I think that's something that this particular incarnation of it is differing from perhaps previous versions, where the characters have a really, really important part of it, and the development of those characters and their interplay have been very important.

So, I really work in that realm in terms of how I bring emotional content to the narrative. And I think that's how I approach it. I'm trying not to be too nervous about being up against these very iconic themes. So I need to have blinders on and just work with what I have. 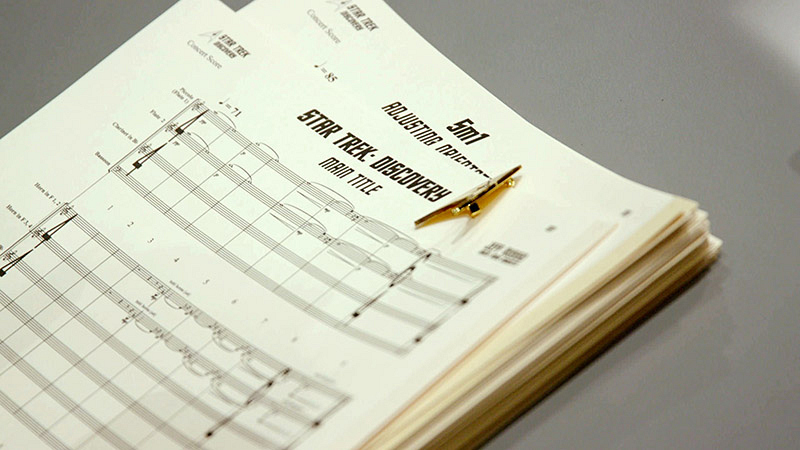 You touched on this, but how much influence did you draw from some of the old shows and movies? Are you listening to those sounds when you're composing?

Russo: Well, I think more so from the original series than any other incarnation. In terms of drawing inspiration, you know, probably more from a palette-standpoint than anything else. Star Trek tends to be a very horn and brass-heavy score. So, at least in [the main title theme], I've utilized that.

But yeah, there's a sense and a tone that I think I want to carry through. I think what we're doing has a bit of a different tone than previous incarnations, and it does seem to be a bit more grounded and a little darker than [where] we've been before. So, I'm working within those sort of parameters as well.

You mentioned the title theme. How many versions did you go through before you settled on the current one?

Russo: Well, before I settled on it, I think I started sketching different melodic ideas and different orchestral ideas for a good while. There were a few incarnations before I decided to show it to anybody.

And then, since showing it to people, there've been some comments and changes—sort of minimal little adjustments, in terms of how it was working to the picture that I'd been working on. But musically speaking, I think we're all pretty much on the same page with what the tone is and what the feel is. I mean, it definitely pays homage to the franchise as a whole, musically. We'll see how it stands up.

You know, I definitely feel like I'm sort of walking in the shadow of giants. [Laughs.] It's a pretty big task...

Can you walk us through that theme, musically, and what you hoped it would evoke?

Russo: Okay, so what I started with ... I started with wanting to evoke the thing that is evoked from the original theme. There's this little sound of flutes, and there's the sound of glockenspiel—maybe it sounds like space. Like, who knows? I don't really know what space sounds like, but in my head they sort of got that.

So, I sort of alluded to that, and then I brought this melody in with the horn, and the horns sort of carry until there is some motion. In my mind, I'm thinking of a title sequence where there's a lot of motion, because the whole idea of Star Trek is about the journey, right? The music, especially for anything that might be the theme, should evoke this idea of motion and journey and moving from one place to another, and exploration. So, I do that with horns, and then strings sort of come in and give us this motion of moving forward, and there's more interplay between horns and strings.

You know, it's always kind of difficult to explain music in words, because really music and words, they don't explain one another; they can live together, but they don't really help one another in terms of explaining what the other one means.

You've composed for both established franchises and original projects in the past. Do you feel more of a sense of responsibility to pay homage to what's come before when working on a property like Star Trek?

Russo: You know, that's an interesting question. This would be, I guess, the second franchise since I did Legion, and Legion is part of the X-Men world. When you're doing something new within the context of a franchise, the idea is to create your own identity and yet still understand your roots, right?

So, I do feel somewhat of a responsibility to pay some sort of homage to what that is. But I think, more importantly, we have to really stand on our own. We have to create our own identity and be who we are under the umbrella of Star Trek. That is a vibe and that is an idea. But what we do within the context of that idea should be individualized. I think that's the idea of what I try to do in writing a score; I create an individual identity for the show, and yet still pay homage. It's a very big task.

What does Star Trek mean to you as a composer?

Russo: Wow. Well, that is a big question. It's hard to really answer what that is. I think that, generally speaking, Star Trek has a feeling musically that is very unique. So my trying to fit what I do into that has been really sort of an interesting conundrum for me. Like, what I do versus what has been done and how to merge the two things together in order to stay within the context of this franchise. But it's thrilling to be able to stand up and write and be a part of it and hear melodies that I have in my head play well up against this picture.