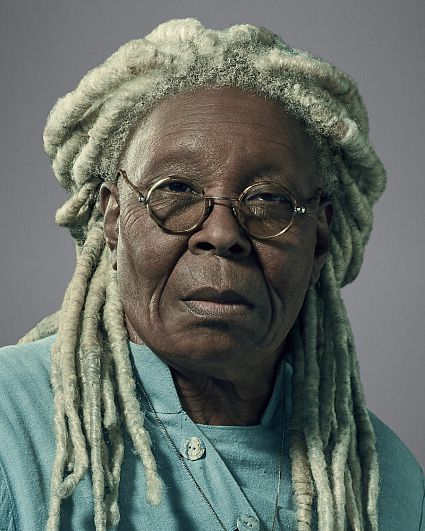 Mother Abagail
Whoopi Goldberg
Biography
Whoopi Goldberg is one of an elite group of artists who have won the Grammy, the Academy Award, the Golden Globe, the Emmy and Daytime Emmy and a Tony Award. She is equally well-known for her humanitarian efforts on behalf of children, the homeless, human rights, education, substance abuse and the battle against AIDS, as well as many other causes and charities.

Born and raised in New York City, Whoopi worked in theatre and improvisation in San Diego and the Bay Area, where she performed with the Blake Street Hawkeyes theatre troupe. It was there that she created the characters which became “The Spook Show” and evolved into her hit Broadway show, Grammy Award-winning album and the HBO special that helped launch her career.

Whoopi made her motion picture debut in Steven Spielberg’s film version of Alice Walker’s “The Color Purple,” for which she earned an Academy Award nomination and a Golden Globe Award. Her performance in “Ghost” earned her the Academy Award and a Golden Globe Award for Best Supporting Actress and she has starred in such films as “Jumpin’ Jack Flash,” “Clara’s Heart,” “The Long Walk Home,” “Soapdish,” “Sister Act,” “Made in America,” “Boys on the Side,” “Ghosts of Mississippi,” “How Stella Got Her Groove Back,” “Girl, Interrupted,” and such animated classics as “The Lion King,” and “Toy Story 3.” She appeared in the 2015 feature film adaption of Adriana Trigiani’s beloved novel, “Big Stone Gap,” opposite Ashley Judd, Patrick Wilson and Jenna Elfman. Whoopi most recently starred in Paramount Picture’s comedy “Nobody’s Fool” opposite Tiffany Haddish. Up next, she will lend her voice to the musically-driven, animated comedy “Pierre the Pigeon-Hawk.”

Whoopi has also produced numerous series, specials and movies for television, as well as theatrical productions on Broadway and around the world, including the Tony Award-winning “Thoroughly Modern Millie” and the Tony-nominated “Sister Act: The Musical.” She produced and made her directorial debut with the Emmy Award-nominated documentary, “Whoopi Goldberg Presents Moms Mabley,” which premiered at the 2013 Tribeca Film Festival before its critically-acclaimed run on HBO.

Whoopi and her partner Tom Leonardis produced the docu-series “According to Alex” for BET and “Strut,” the GLAAD Award-winning original series for Oxygen which follows a group of transgender models breaking down barriers in the world of fashion. Most recently, she executive produced the documentary “Waldo on Weed” which premiered at the 2019 Tribeca Film Festival. Whoopi is developing a prime-time quiz show, “Win Your Country!” through her One Hoe Productions banner, in partnership with 44 Blue Productions.

Whoopi’s Broadway credits include “A Funny Thing Happened on the Way to the Forum,” “Ma Rainey’s Black Bottom” and “Xanadu” and she made her West End stage debut in a special limited run as Mother Superior in “Sister Act: The Musical” in 2011. Next year, Whoopi will reprise her starring role as Deloris Van Cartier for the first time on stage, with Jennifer Saunders as Mother Superior, in a newly adapted production of the smash hit musical “Sister Act: The Musical” at London’s Eventim Apollo, which is scheduled to premiere in July 2021. Goldberg is also a producer of the new production, as she was when the show first debuted in the West End in 2009. Tickets for this show broke all on-sale records for a run at the Eventim Apollo.

In 1992, Whoopi made her debut as an author with her first children’s book, Alice. She also wrote Whoopi’s Big Book of Manners and the Sugar Plum Ballerinas book series for young readers and her books for adults include Book, Is It Just Me? and If Someone Says ‘You Complete Me’…Run! Rizzoli published her entertaining book, The Unqualified Hostess, in September 2019, in which she illustrates how to set a great table and shares ideas for unforgettable celebrations all at an affordable price.

In 2019, Whoopi launched her first fashion line, DUBGEE by Whoopi, in partnership with The Powell Companies Real. Founded, designed and inspired by Whoopi, the line empowers and promotes individuality with stylish, comfortable and aspirational products that fit every body and lifestyle. This December, she will debut her fourth collection of holiday wear, which this year features scarves and masks.

Whoopi is a member of the Academy of Motion Picture Arts & Sciences Board of Governors, which sets the Academy’s strategic vision, preserves the organization’s financial health and assures the fulfillment of its mission. She was also honored in 2017 with the Disney Legends Award, which celebrates artists whose work has significantly contributed to Disney’s enduring reputation for creative excellence.