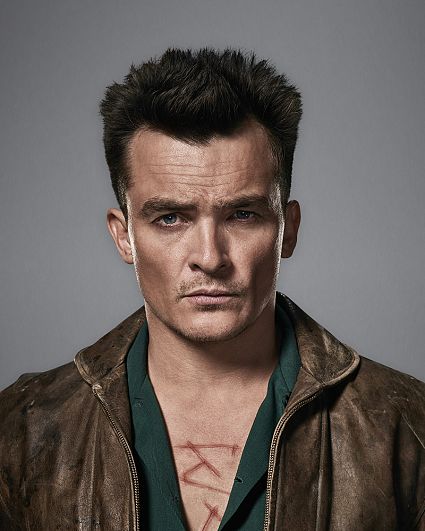 Ernest Donovan
Rupert Friend
Biography
Rupert Friend is best known for his five seasons on Homeland as Peter Quinn, a role for which he received an Emmy nomination. Friend first rose to fame after being nominated by the British Independent Film Awards as "Best Newcomer" for his first professional role in The Libertine opposite Johnny Depp and John Malkovich. He followed that playing Mr. Wickham in the 2005 adaptation of Pride & Prejudice, directed by Joe Wright.

In 2008 Friend appeared in The Boy in the Striped Pajamas with Vera Farmiga and David Thewlis, and in 2009 he starred opposite Emily Blunt in The Young Victoria, directed by Jean-Marc Vallée. Later that year, Friend went on to play the title role opposite Michelle Pfeiffer in Stephen Frears' Chéri. In 2013 Friend co-starred as Oliver Baumer in Starred Up, directed by David Mackenzie; the film was nominated for eight British Independent Film Awards, including one for "Best Supporting Actor" for Friend. In 2015 Friend starred as Agent 47 in Fox's Hitman: Agent 47 opposite Hannah Ware and Zachary Quinto. Earlier this year, Friend was seen in Armando Iannucci's film The Death of Stalin, opposite Steve Buscemi, Michael Palin, and Jeffrey Tambor.

Friend started his stage career in the acclaimed Edinburgh Fringe production of Kassandra and followed that with the London West End Production of The Little Dog Laughed, directed by Jamie Lloyd and co-starring Tamsin Greig and Gemma Arterton. He received rave reviews for his 2012 performance in Dennis Potter's Brimstone and Treacle at the Arcola Theatre in London.

Friend trained at the Webber Douglas Academy of Dramatic Art in London. Aside from his two BIFA nominations, he was named "Outstanding New Talent" at the 2005 Satellite Awards and was nominated in 2013, 2014, 2015 and again in 2016 as part of the "Best Ensemble Cast" for Homeland at the Screen Actors Guild Awards.

Additionally, Friend is a writer, producer, director, and lyricist. He co-wrote and produced the short film The Continuing and Lamentable Saga of the Suicide Brothers, which won "Best Comedy" at the New Hampshire Film Festival in 2009. He went on to write, direct, and produce Steve, starring Colin Firth, for which he was awarded the Flickers' Rhode Island International Film Festival's "Crystal Vision Award." Also, Friend wrote the lyrics for the MOBO Award-winning U.K. group Kairos 4Tet on their album, Everything We Hold, which was named one of The Observer's "Hidden Gems of 2013."

Currently, Friend is in development for his first feature film as a writer/director.