The CBS fall comedy brings new meaning to the definition of family.

In 2018, family can mean a multitude of things—in the case of Happy Together, it refers to a very in love married couple adding a surprising member to their family: a hip, fresh-faced pop star who allows them to revisit their glory days while they, in turn, give their young ward some much-needed stability.

At the 2018 Television Critics Association in Beverly Hills, the cast of Happy Together—Damon Wayans, Jr., Amber Stevens West, and Felix Mallard—were joined on stage by Executive Producers Ben Winston, Tim McAuliffe, and Austen Earl to talk about the charm—and origin—of the new series.

Earl painted an effective analogy of loving, happy spouses being like two beautiful butterflies who begin as separate entities, only to crawl into a cocoon and spend their nights binging TV shows. Earl said that in many ways, Happy Together is about "the way you can explore the adventure of being with someone you love for a long time." 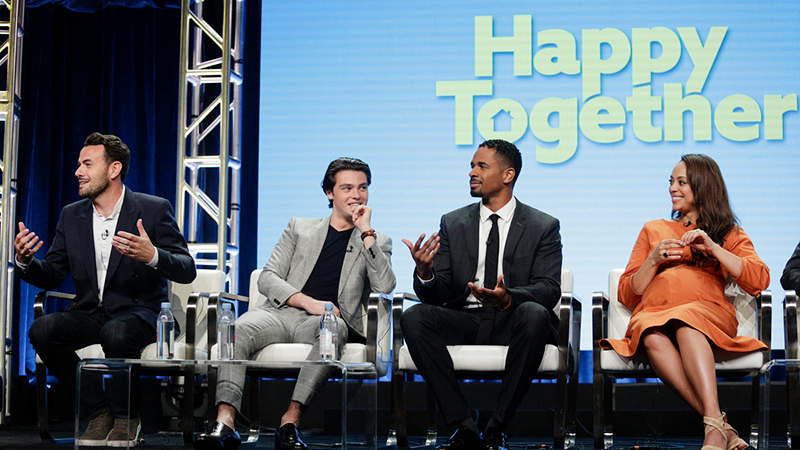 "It was very refreshing reading this and going, oh, they're actually into each other. It's good to turn on the TV and see people that are happy," added Wayans, who plays Jake, an accountant, married to a restaurant designer named Claire, played by West. "And then you bring in another character that's even happier than they are, and they're... happy together."

The character Wayans is referencing is Mallard's Cooper James, a pop star who retains Jake's services as an accountant and shows up one day asking to live with Jake and Claire. "We think of [Jake and Claire] as a unit, a team, and then there's this injection of a very different lifestyle. [Cooper] helps reflect back on them the way they've changed," said McAuliffe.

"They are very silly and weird together and enjoy all the same things. They have a lot of fun memories to share because they've been together since college. There's a lot of people that can relate to that," explained West, who compared Cooper to a golden retriever. "It's like having a sweet, sweet puppy in your house," she laughed.

"The show's about marriage, it's about getting a bit older, it's about youthfulness; it's about something happening in your life that you didn't expect to happen and how you deal with that," said Winston, later adding, "I can't think of a couple on television that are as brilliant as Damon and Amber are on this show."

The origin of Happy Together is particularly fascinating. Winston explained, "I was making a film with One Direction and I'd just moved into my very quiet house in London... and a young man who I was working with, by the name of Harry Styles, asked me if he could live in our attic for a few weeks." Winston and his wife agreed, but "a few weeks" eventually turned into 18 months!

The most heartwarming part? Winston didn't want Styles to leave—the singer had been so integrated into his family that it felt like a child was leaving the nest ("I had a teenager before I had a baby," joked Winston).

It's this key part of the experience—the emotional connection between the couple and the pop star—that made Winston think, "This could be quite a fun sitcom." 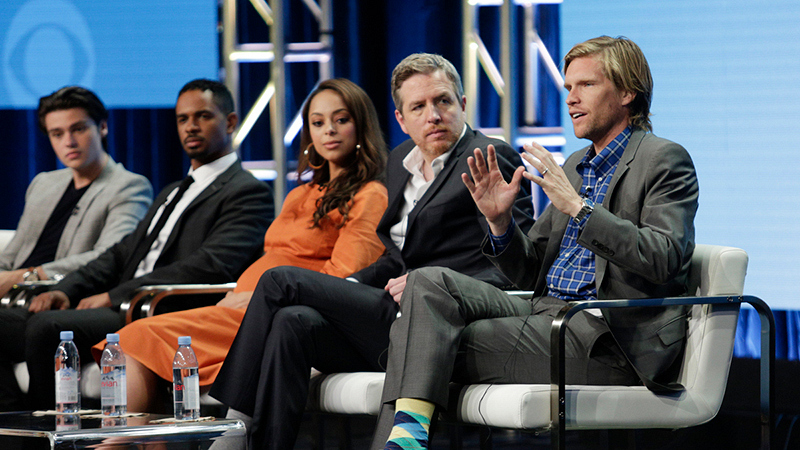 Winston added, "What happened with Harry and I is just the concept. But fundamentally what you're looking at is a mid-thirties couple who feel like their life is maybe getting a bit stale, a bit boring." Cooper, in turn, is looking for a normal life away from the tabloids and flings. And together, the trio creates their own little family unit.

"These are all fictional characters," Wayans said, but joked that he'd been studying Winston's movements as a character study—and even went so far as to emulate Winston's hand gestures, to the crowd's amusement. "The scenario is from real life but it's all about relationships and these people growing."

He continued, "When Ben [Winston] told me [Happy Together] was inspired by his actual life it hooked me."

Plus, joked Wayans, he got to learn some key accounting terminology for his character's job. "I'm learning some acronyms. Payroll. Payroll is like a huge word. Write-offs. W-2s."